The present invention relates to a medium composition and a culturing method and, more particularly, to a stem cell-culturing medium composition that functions to enhance the efficiency of stem cells and a method for culturing stem cells using the same. The purpose of the present invention is to use a culture medium containing the derivative AA2G in developing various media capable of enhancing functions of adult stem cells after the culture medium is primarily assayed for ability to enhance the totipotency/pluripotency of embryonic stem cells and the efficiency of dedifferentiated stem cells. 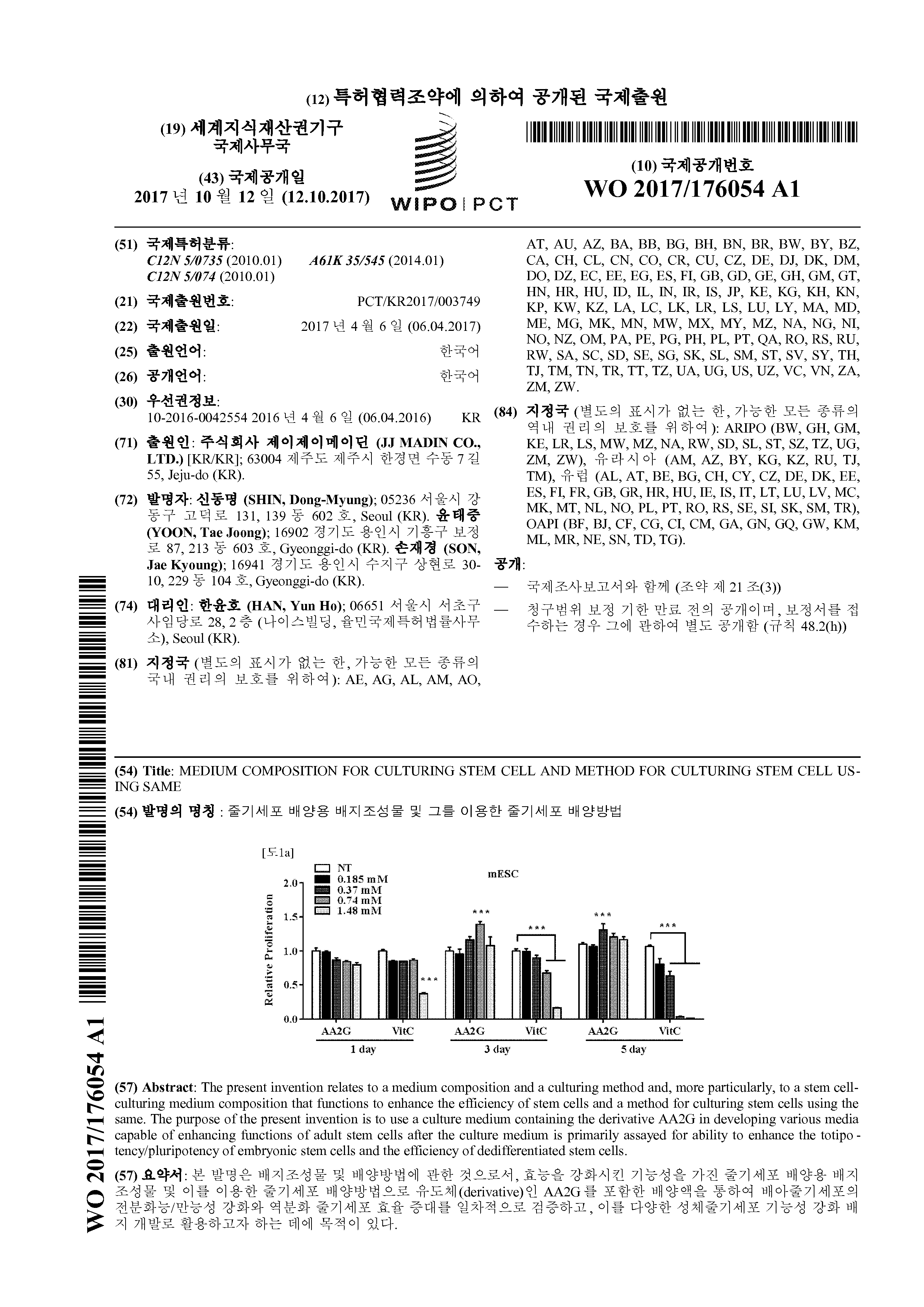 Methods and systems for identifying and treating patients with cancers that can bind E-selectin are disclosed. E-selectin-binding cancers are identified by their cell surface expression sialyl Le3 and sialyl Lex carbohydrate epitopes, and such cancers can be identified by antibodies that bind to sialyl Lea/x, such as HECA-452. Such cancers can be treated with antagonists of E-selectin such as glycomimetic compounds and with immunotherapies targeting the cell surface carbohydrates containing the sialyl Lea/x domains to block and/or disrupt the binding of E-selectin. 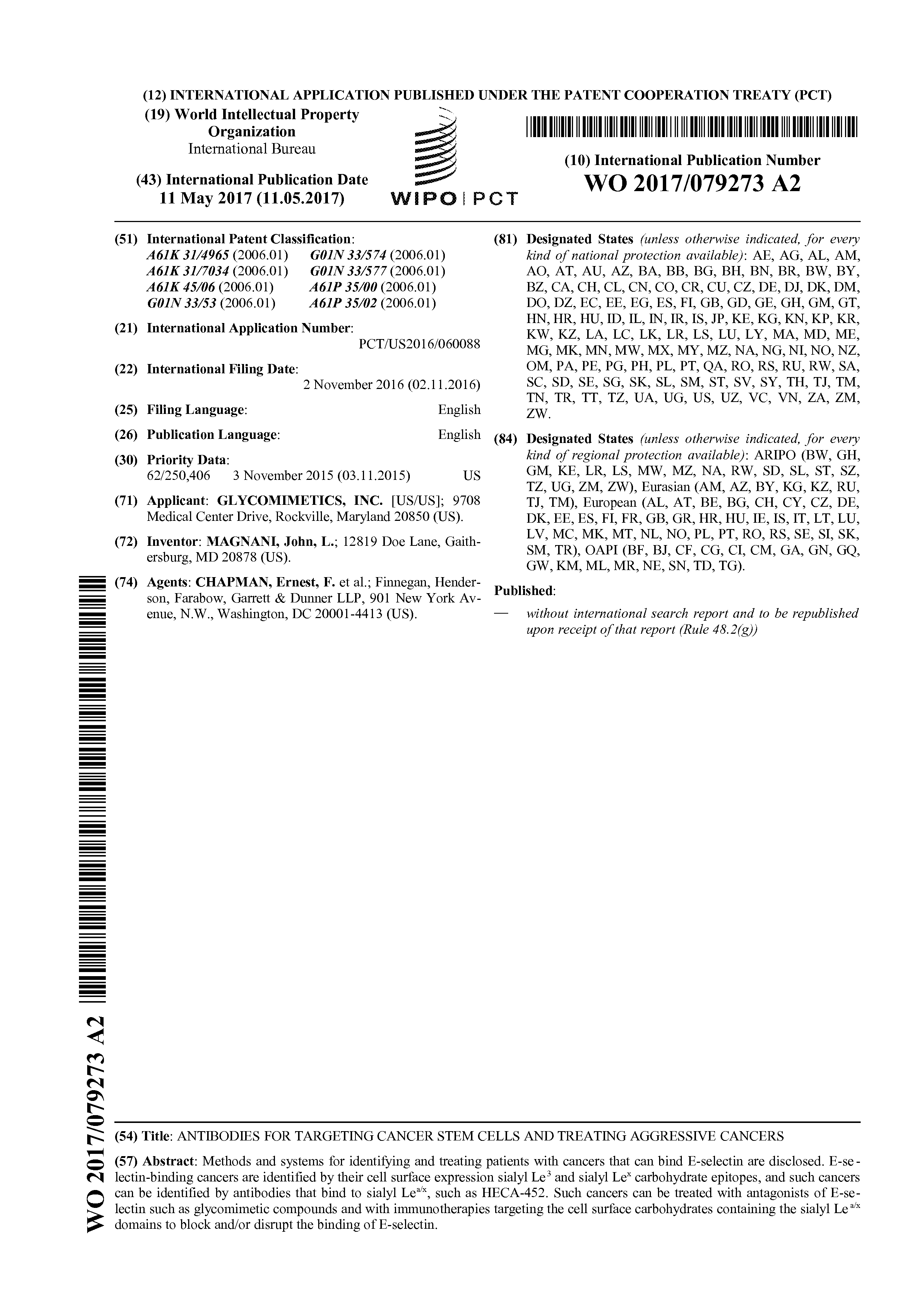 Disruption Of Rock1 Gene Leads To Plants With Improved Traits 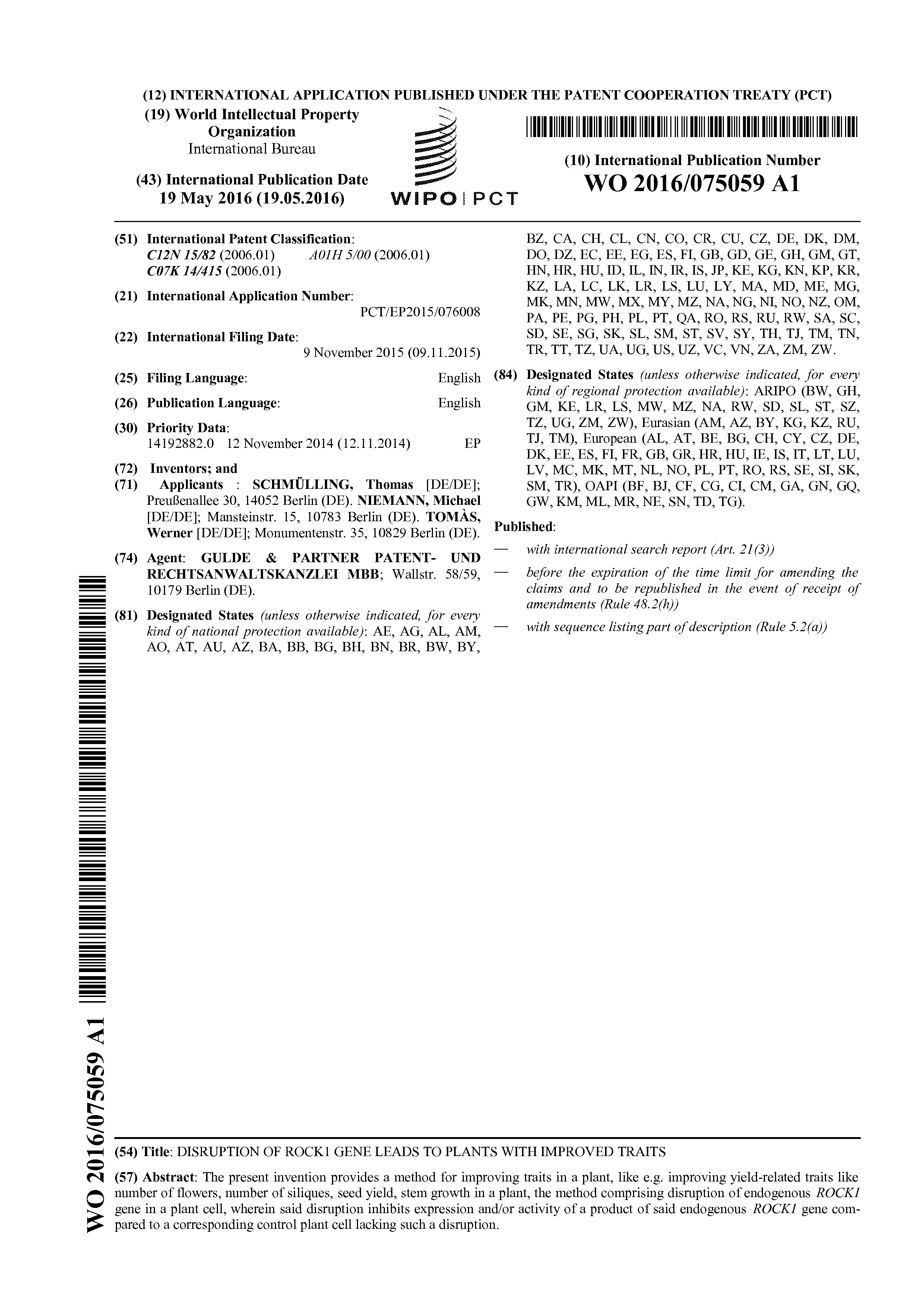 The present invention relates to the field of stem cells. More specifically, the present invention provides methods and compositions for using pluripotent stem cells to treat ischemic retinopathies. Efficient generation of functional vascular progenitors in parallel with differentiation of retinal photoreceptors from the same patient-specific hiPSC line could be used to comprehensively treat ischemic retinopathies. Such hiPSC-based therapies could potentially revitalize adult vascular progenitors, which are often rendered defective in their diabetic environment, by reprogramming them back to a pristine, non-diseased embryonic state. 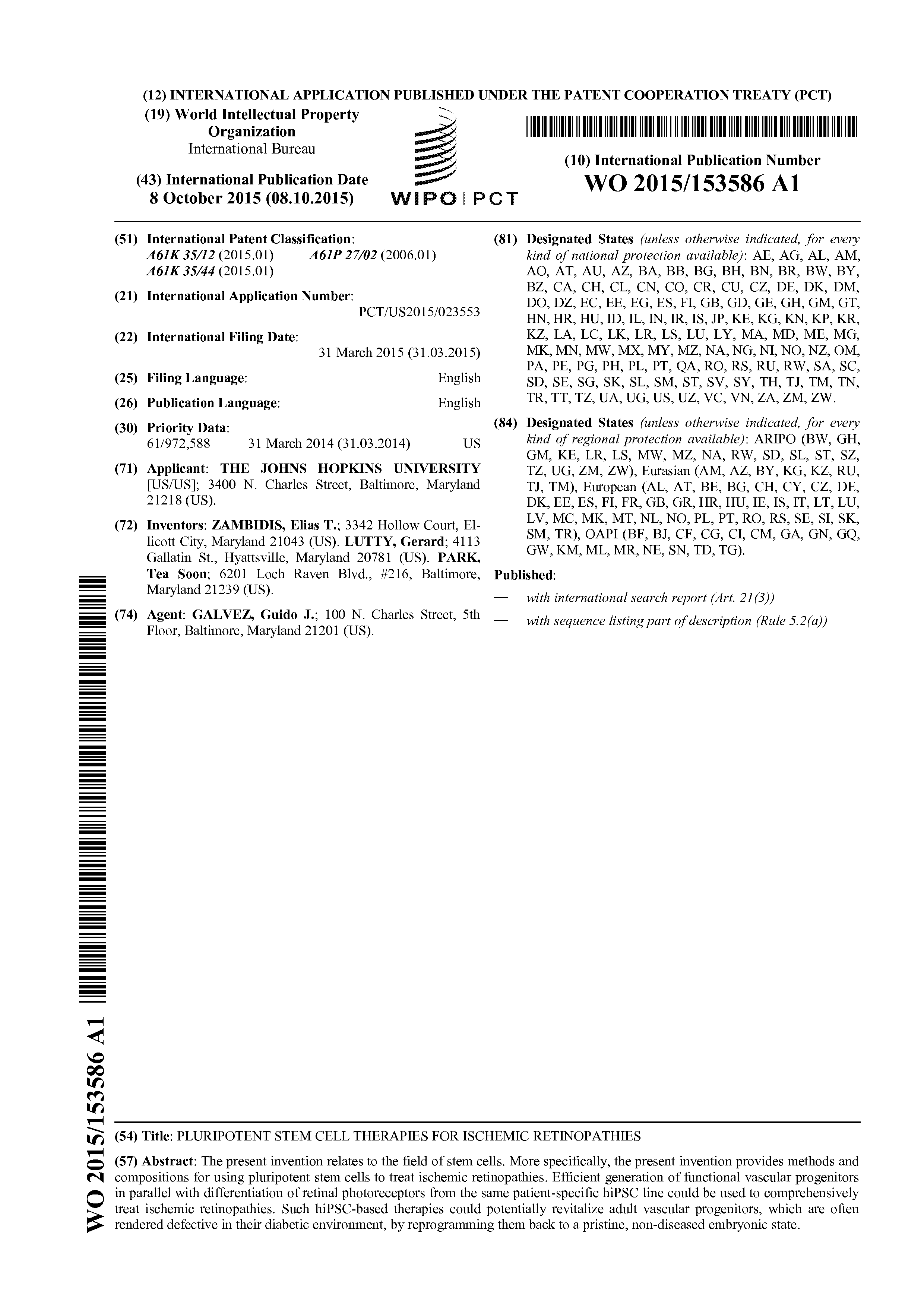 Exopolysaccharide For The Treatment And/or Care Of The Skin, Mucous Membranes And/or Nails

Exopolysaccharide of a bacterial strain for use in treatment and/or care of the skin, mucous membranes, hair and/or nails, as well as its cosmetic and/or dermopharmaceutical compositions. In particular, for the aging of skin and in particular for the treatment and/or prevention of wrinkles. 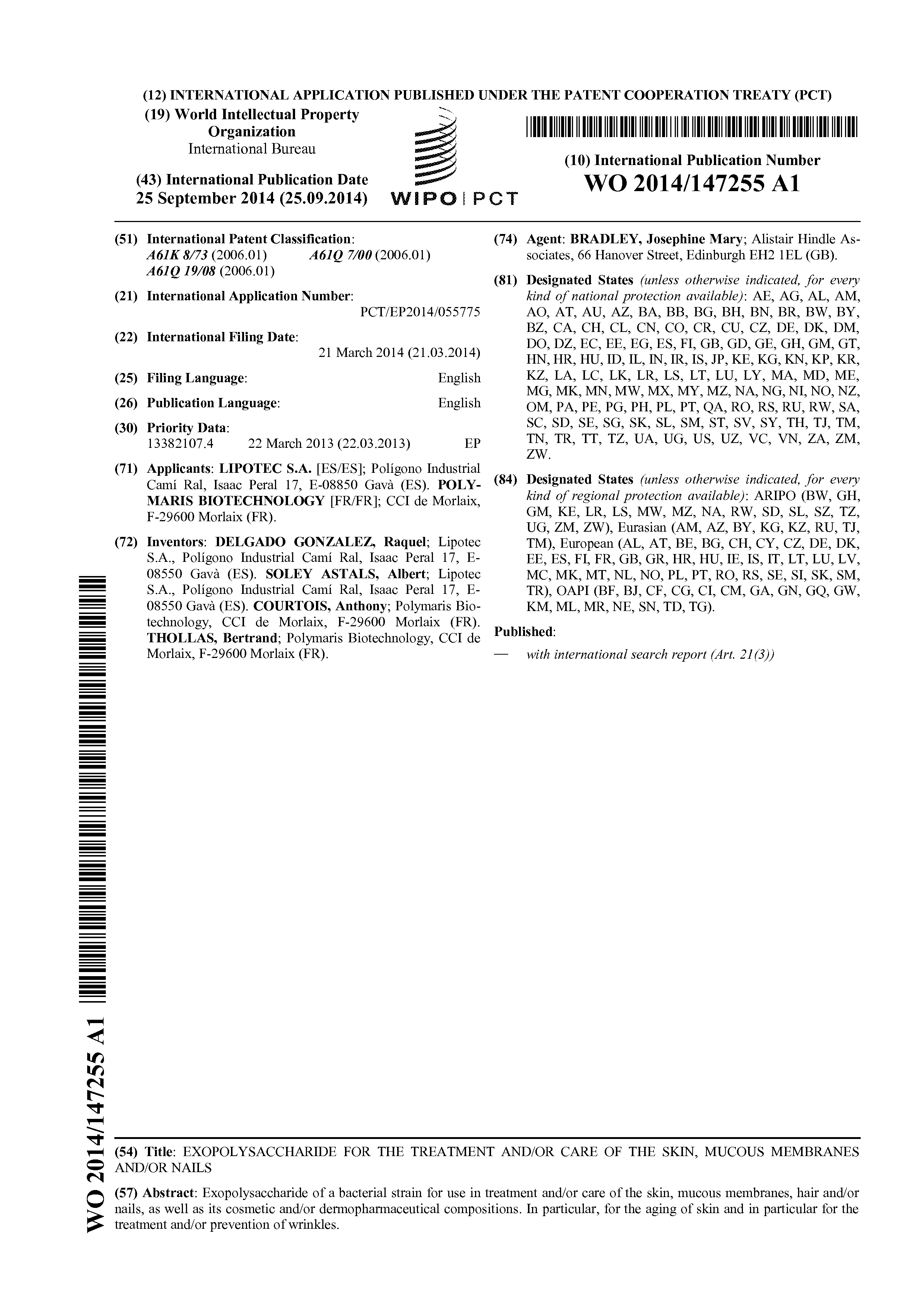 There is provided a non-cellular bandage and a method of treating damaged tissue derived from a disease or symptom by applying the non-cellular bandage that includes serum, fibrin, and collagen. There is also provided a method of preparing a non-cellular bandage for treating damaged tissue derived from a disease or symptom including the steps of preparing serum, fibrin or an equivalent substitute, and collagen; mixing the serum, the fibrin, and the collagen to form a mixture; and forming a bandage by using the mixture. The non-cellular bandage facilitates the perfect environment in which to actively promote cellular regeneration and tissue repair, while simultaneously reducing immune rejections, scar formation and infection rates when it is applied to a biological tissue. 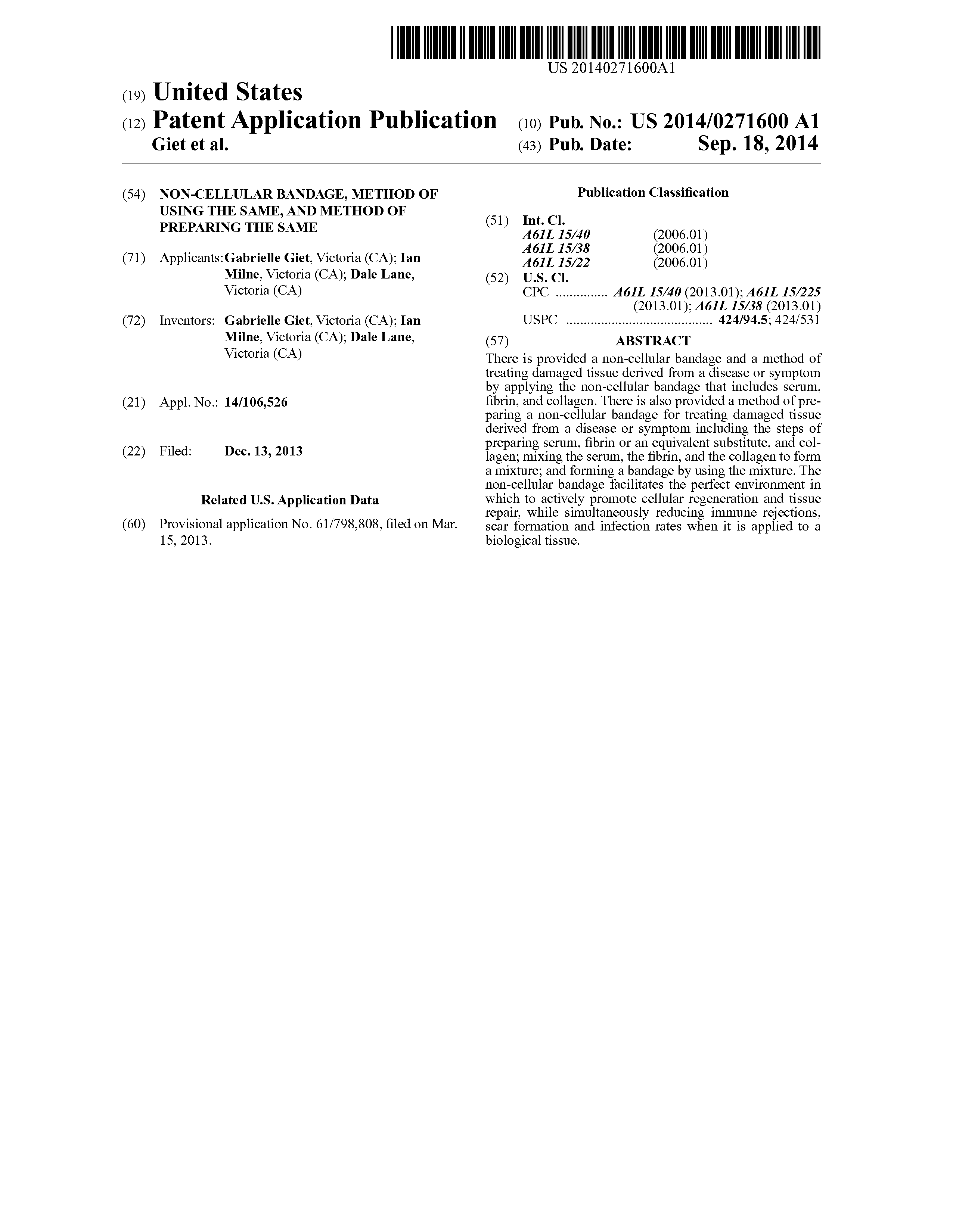 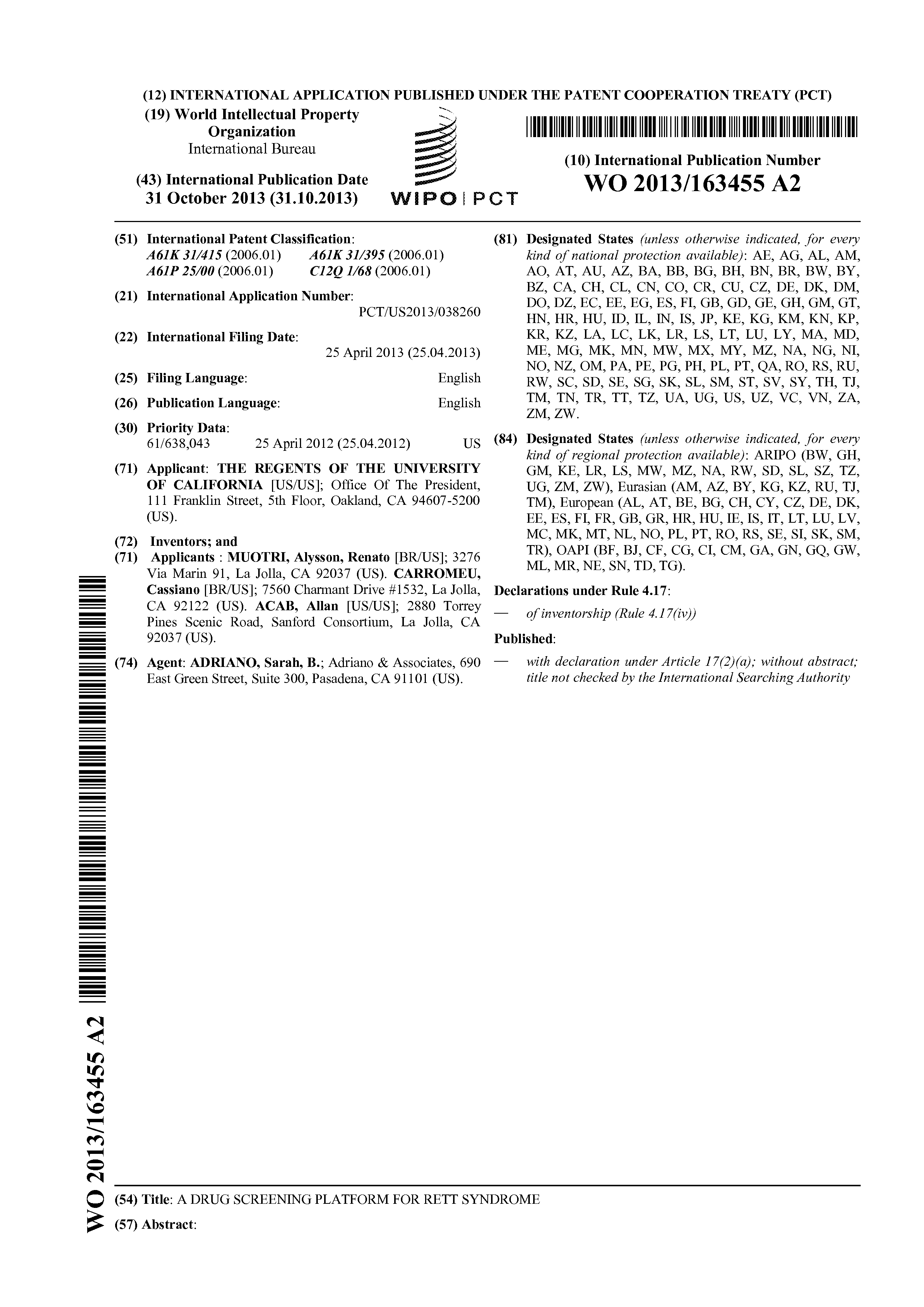 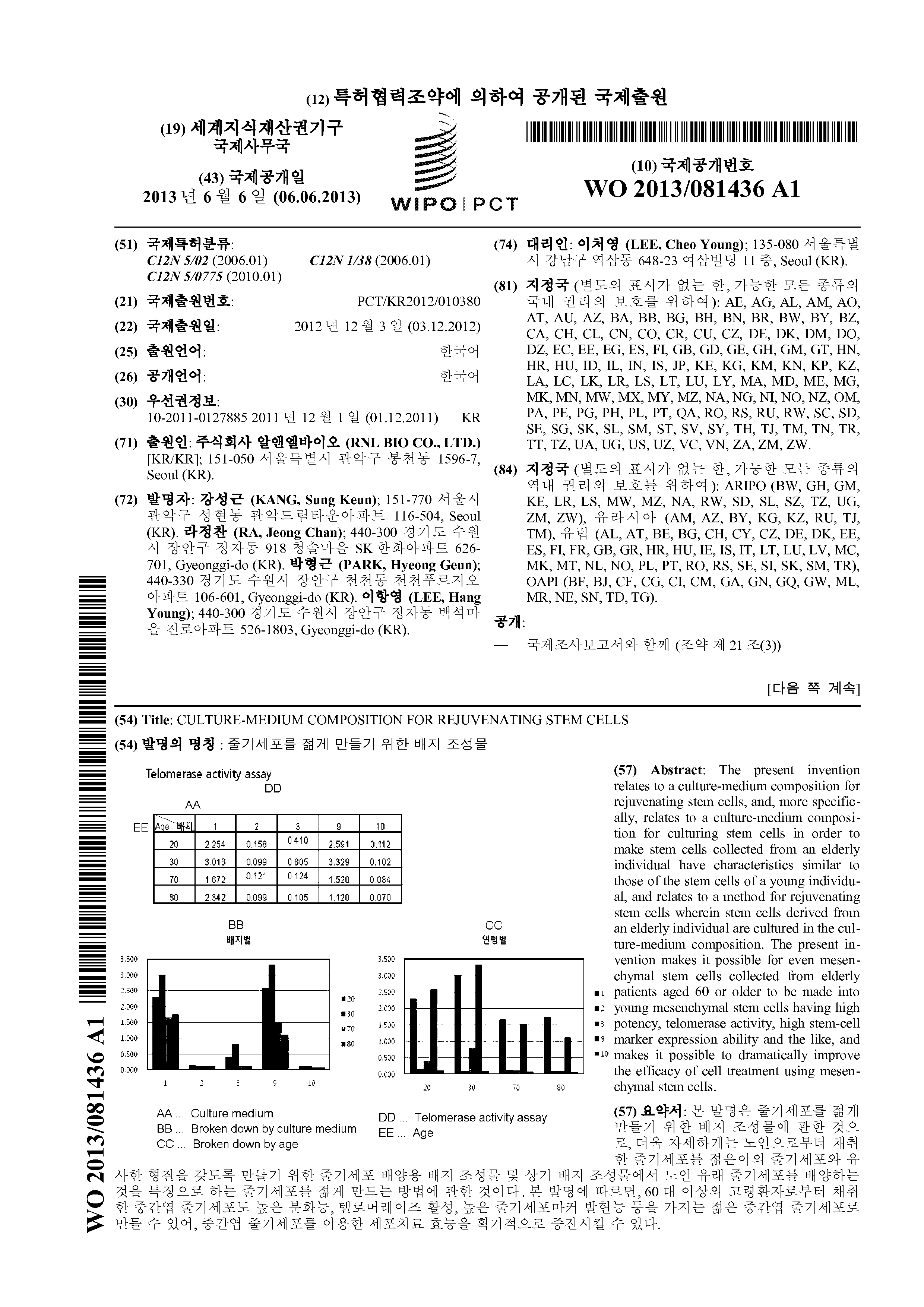 The present invention relates to the field of stem cell biology, in particular the linage specific differentiation of pluripotent or multipotent stem cells, which can include, but is not limited to, human embryonic stem cells (hESC) in addition to nonembryonic human induced pluripotent stem cells (hiPSC), somatic stem cells, stem cells from patients with a disease, or any other cell capable of lineage specific differentiation. Specifically described are methods to direct the lineage specific differentiation of hESC and/or hiPSC into floor plate midbrain progenitor cells and then further into large populations of midbrain fate FOXA2+LMX1A+TH+ dopamine (DA) neurons using novel culture conditions. The midbrain fate FOXA2+LMX1A+TH+ dopamine (DA) neurons made using the methods of the present invention are further contemplated for various uses including, but not limited to, use in in vitro drug discovery assays, neurology research, and as a therapeutic to reverse disease of, or damage to, a lack of dopamine neurons in a patient. Further, compositions and methods are provided for differentiating midbrain fate FOXA2+LMX1A+TH+ dopamine (DA) neurons from human pluripotent stem cells for use in disease modeling, in particular Parkinson's disease. Additionally, authentic DA neurons are enriched for markers, such as CD 142, and A9 type neuronal cells. 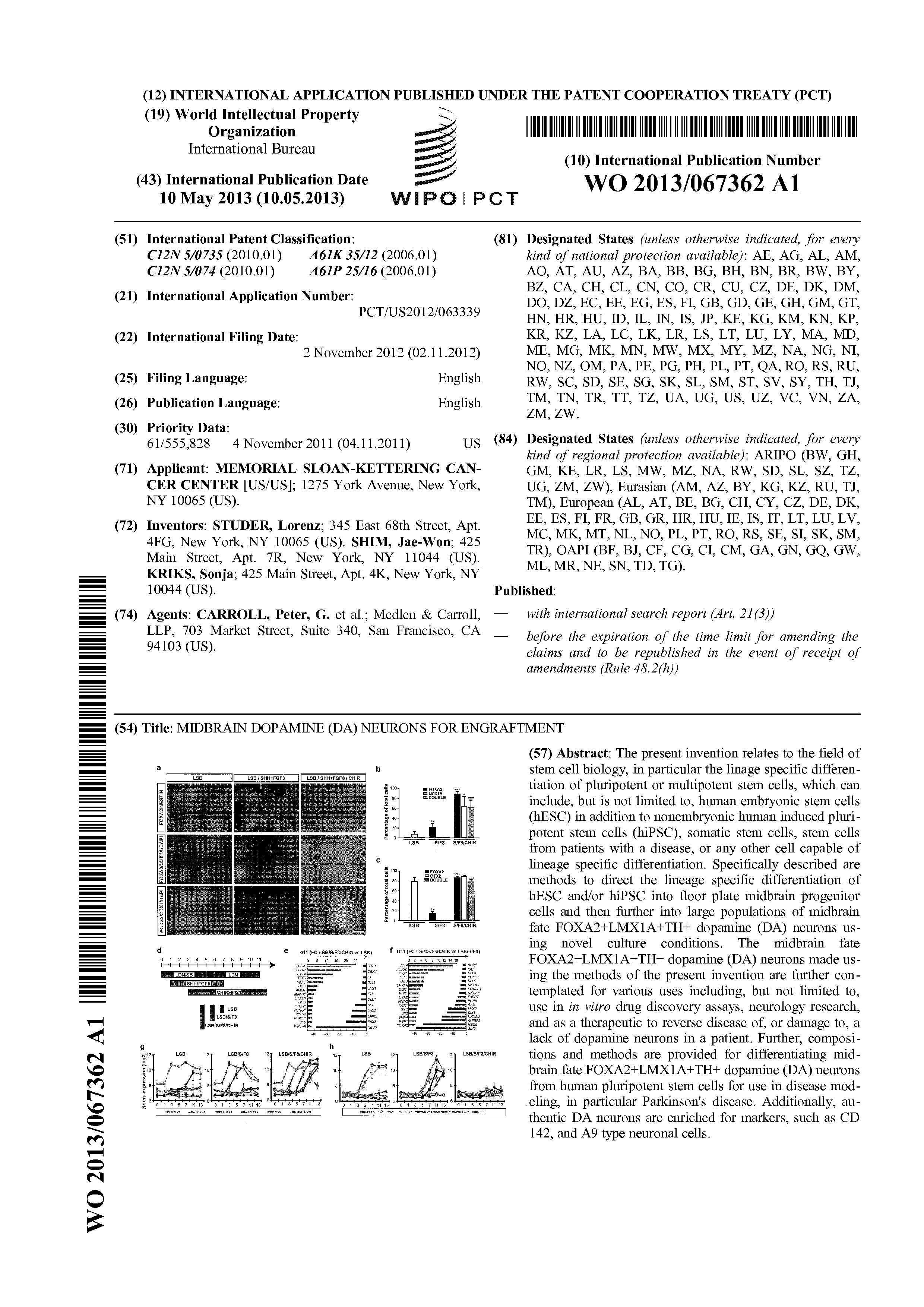 Modulation Of Neurogenesis By Ppar Agents

The instant disclosure describes methods for treating diseases and conditions of the central and peripheral nervous system including by stimulating or increasing neurogenesis, neuroproliferation, and/or neurodifferentiation. The disclosure includes compositions and methods based on use of a peroxisome proliferator-activated receptor (PPAR) agent, optionally in combination with one or more neurogenic agents, to stimulate or increase a neurogenic response and/or to treat a nervous system disease or disorder. 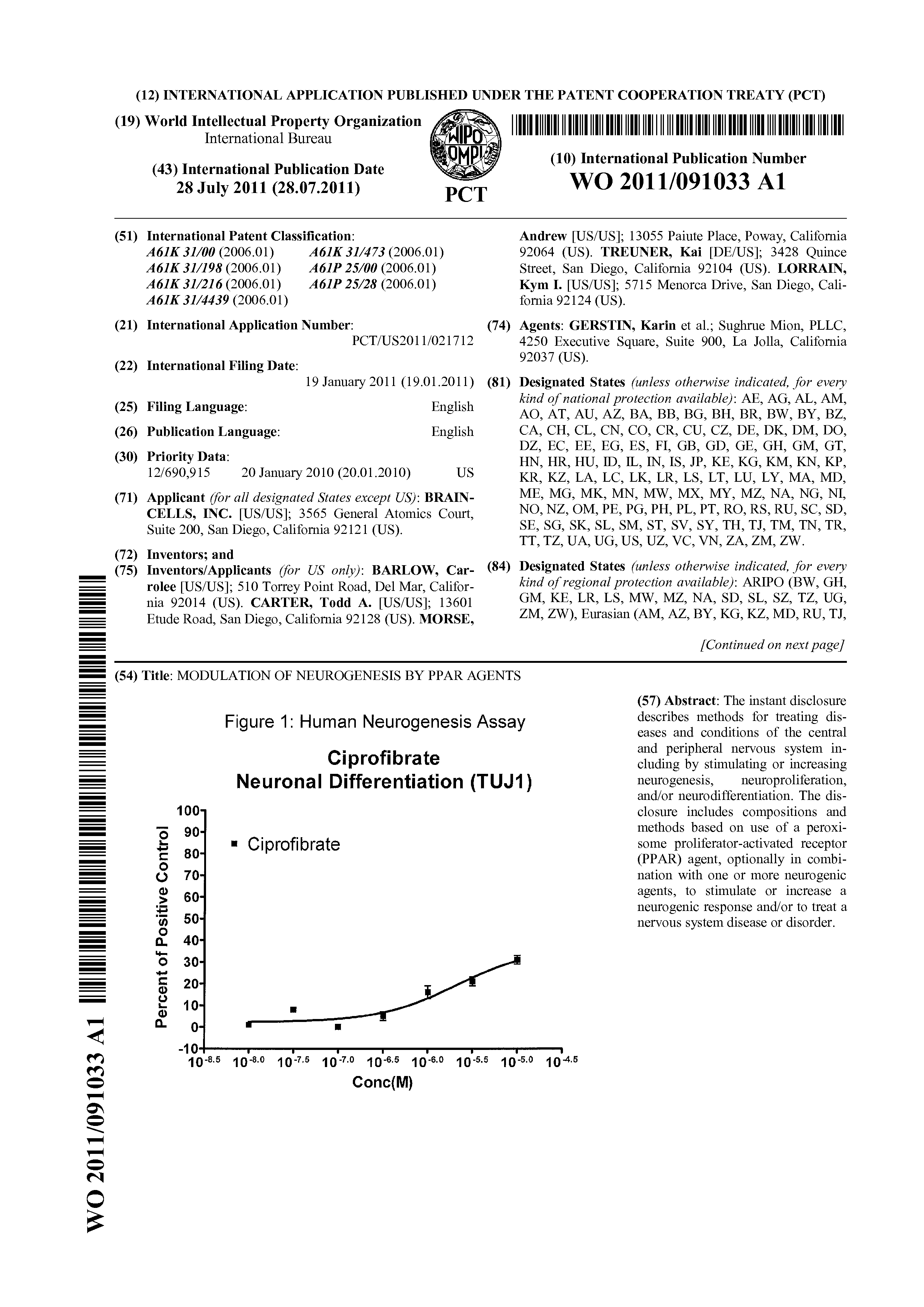